Easter all over the world

After this long weekend of Easter celebrations, you should all be fed up of eating chocolate, hot cross buns and pickled fish, right? Well, like you, people all around the world now have to rest from the different Easter festivities. Here’s a quick view of what happens all around the world. Africa With almost 70 […]

After this long weekend of Easter celebrations, you should all be fed up of eating chocolate, hot cross buns and pickled fish, right?

Well, like you, people all around the world now have to rest from the different Easter festivities.

Here’s a quick view of what happens all around the world.

With almost 70 million Christians within the continent, Easter is widely celebrated in Africa!

In Ethiopia, Easter, also called Fazika, is one of the most revered celebrations of the year. After 55 days of fasting for lent, all the Christians spend Easter’s Eve gathered at church praying until 2am with candles lit . When they get back home, they finally break their fast.

Easter is also a day for the Ethiopian families to exchange gifts e.g.: lamb or loaves of bread.

Eggs, lamb and chocolate are the main dishes in Europe for Easter. The young Europeans hunt on the Easter Sunday morning for chocolate eggs in their own gardens or even in public gardens!. After this exhausting hunt, all the family eat lamb together.

In some Northern and Eastern European countries such as Netherland, Poland, Bulgaria, Romania or Lithuania,children also paint boiling eggs in an array of bright colours. 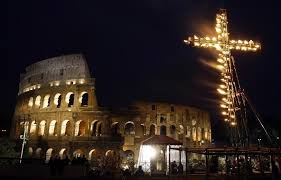 In Rome, the Pope has a busy weekend! On good Friday, the Pope celebrates the via crucis or “the station of the cross” in Rome, near the Colosseum. A huge cross with burning torches light the sky while it’s described in different languages how Jesus carried the cross to his crucifixion. Approximately thousands of people follow the procession with candles.

On Sunday, the Pope blessed the crowd at St Peter’s Basilica in Rome, with his urbi et orbi (which in Latin means “for the city of Rome and the entire world”) address.

But the champions of Easter celebrations is definitely the Spanish!For a whole week, named the Semana Santa (holy week), they celebrate Easter with processions in the streets. All the cities have there own traditions, but the common feature is the use of the nazareno, a penitential robe for some of the participants of those processions.

The Semana Santa is also celebrated in some South Americans countries such as Chile, Colombia or Brazil.

Easter in North America is the same as it is in Europe, except that instead of eating lamb, the Americans and Canadians prefer ham.

The white house and the Easter egg Roll

Every year the president of United States holds an Easter Roll event for children and their parents. Originally from England, the Egg Roll is a race where children push an egg through the grass with a long-handled spoon.

This year the Obama’s hosted this event for 30 000 guests as it was the 135th birthday for this tradition.